My Great Uncle, The Poet 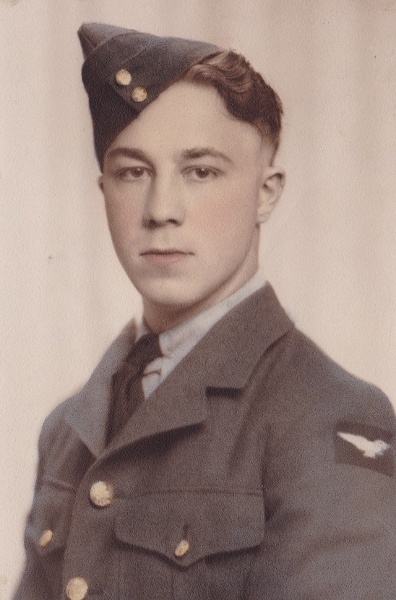 You probably have a legend in your family. A relative you may have never met, but whose story is important and has been passed down to you.

This young man is my Uncle Gab. He was made an RCAF Sargeant in December 1940, and was killed in a training accident over Scotland in July 1941. He was 23 when he died, with a fiancée waiting for him back in Canada. His widowed mother was waiting for him, too.

My mom arrived on the scene 10 months after Gabriel died, but for the longest time I didn’t realize they’d never met. It seemed like she knew him. The stories my grandparents, aunts and uncles told must have felt very real to her. I could sense the admiration and love my older relatives had for him when they got talking about the past.

I, too, was intrigued by his story. He applied twice to the RCAF. The first time there was a change in enlistment protocol and he had to apply again a year later. He wanted very much to serve as a pilot and air gunner, and took training in Toronto, Halifax and smaller places. The day after he was made a Sargeant, he was sent to the UK for additional training.

The story goes that the day his plane went down he and another airman had switched places. Normally my uncle would have flown the plane but on this day he was the gunner. I always think of Randall Jarrell’s poem “The Ball Turret Gunner” and wonder if that’s where my uncle sat, in the bottom of a round glass globe, realizing, very suddenly, that he was in a terrible situation. Four other men were on the plane, but Gab was the only one who was killed. His death record states the facts plainly: “Multiple injuries. 5th degree burns. Dead.”

On several occasions my Mom showed me her uncle’s handsome photo and the handwritten poem in faded brown ink she kept in a photo album. Sometimes I asked her to take out the album so I could look at the poem. I’d read it again and again, trying to memorize it. I’d forget about it for a time, then ask her to show me again. But it wasn’t until I was in university, writing poetry and studying the great writers that my interest in the poem piqued. Did my uncle really write this beautiful poem? How did it come to be written? Was there more writing, and if so, did it any of it survive?

The fact that this poem survived, likely written while he was overseas, suggests to me that he placed it somewhere with care — that he wanted it to make it back to Canada even if he didn’t. Equally intriguing to me is that this elegant poem was written in English. Although he attended a bilingual school, Gabriel’s first language was French.

One question leads to another. Was he passionate about reading? Did he read English and French poetry for fun? Did he have a favourite writer? Did he consider himself to be a writer, or just someone who enjoyed playing with words from time to time — or just on long, lonely days spent far away from the people he loved back home?

I know from Gab’s military application that he considered himself an avid sportsman. I love that he also had this thoughtful, artistic side. Musical talent has passed through the genes on both sides of my family. Even my relatives that don’t play an instrument sing beautifully. A few of us like to draw and paint and are quite good at it. As for the literary arts, there’s just this incredible mystery man, my great uncle.

I’m proud of you, Uncle Gab. Thank you for your courage to serve, and for this.

After The Last Long Daring Flight

Then I’ll fly in heaven forever
Far over these lands down below
And I’ll whisper a fervent prayer
For the dear ones I used to know.